Part 1 in this series of four articles on the physiology behind the development of type-2 diabetes.

Written by Fiona Moncrieff
Updated over a week ago

Type-2 diabetes is a complicated disease with multiple theories as to how it develops. Arguably, it could be defined as a disease of ‘energy toxicity’ within the cells, whereby the body can’t regulate the energy we get from food effectively. It’s a condition that develops over time. Living a lifestyle that includes a diet high in processed foods, little activity, high levels of stress, and poor sleep can all contribute.

Our liver and pancreas play an essential role in regulating our body’s weight and health. In individuals with type-2 diabetes, we see high levels of fat stored within these vital organs. This excess stored fat affects how well the liver and pancreas can function. One of the side effects of these organs being unable to function properly is an increase in the amount of sugar in the bloodstream, which is the key marker for type-2 diabetes.

You can find an introduction to Professor Roy Taylor's work with the DiRECT study in our article here on diabetes remission. As a quick recap, the study split 298 individuals living with type-2 diabetes into two groups. The first group (known as the control) were to continue standard treatment with their GP, while the second group (known as the intervention) were given liquid meal replacements that totalled 800kcal a day for 12-20 weeks, with a gradual re-introduction of whole foods for 2-8 weeks.

The study demonstrated that it’s possible for many people to put their type-2 diabetes into remission, with over 46% of individuals in the treatment group achieving a HbA1c below 48mmol/mol after 6-months (the diagnostic threshold for type-2 diabetes). For overweight individuals, it seems that losing more than 10% of your body weight can increase the chances of achieving remission.

But overall weight loss is only part of the story. Research has shown many individuals can develop type-2 diabetes even if they're within the healthy weight range.

The DiRECT study also reported large reductions in pancreatic and liver fat in participants who achieved remission, regardless of the total amount of weight they lost. This indicates that the fat stored within these organs plays a key role in the development of type-2 diabetes.

Illustrating this, below is an image of a participants' liver in the trial. The image on the left shows the volume of liver fat at the start of the intervention (36%), and on the right, the volume of fat at the end of the trial (2%) when remission was achieved.

It's this understanding that's supported the development of the 'personal fat threshold' hypothesis. This hypothesis states that everyone has a limit to the volume of fat they can store in their adipose tissue (e.g. the fat stored underneath the skin). When this limit is reached, your body will start to store the fat within your vital organs (including the pancreas and liver).

It's this transition from fat storage under the skin to the internal organs that could give us a greater understanding of how type-2 diabetes develops, and how we can provide more individualised support for people living with this condition.

But before we discuss the mechanisms of this in more detail, it's important to understand how the body stores and regulates energy, and this will be the focus of this article.

Our body's primary fat storage site is our adipose tissue. Adipose tissue is mainly found beneath the skin in the form of subcutaneous fat. It's our most abundant source of energy: even a lean adult male will have in the region of 50-70,000kcal of fat stored in their adipose tissue.

When you eat a meal containing fat, this fat will travel through the stomach to the gut (aka our intestines). From here, the fat is then moved into transport molecules called chylomicrons (pronounced ky-low-my-crons). Chylomicrons are like boats, they transport fat (the cargo) around the body to the cells that need it. Depending on the requirements of each cell, the fat will either be used for energy straight away, or stored in the adipose tissue for later.

When the chylomicron has delivered the majority of its cargo (fat) to the cells and adipose tissue, it will then become a 'remnant' (aka an empty vessel), with small amounts of fat remaining inside. This empty vessel will then travel to the liver to be recycled. The liver will either store the leftover fat, or send it out in other 'boats' similar to chylomicrons known as low-density-lipoproteins.

Low-density-lipoproteins (LDL) perform a similar job as the chylomicrons, delivering fat around the body to either be used for energy, or stored in the cells for later use. Imagine the gut to be the port, the chylomicrons the boat, the fat the passengers, and the liver the recycling plant. You can see this presented in the image below: 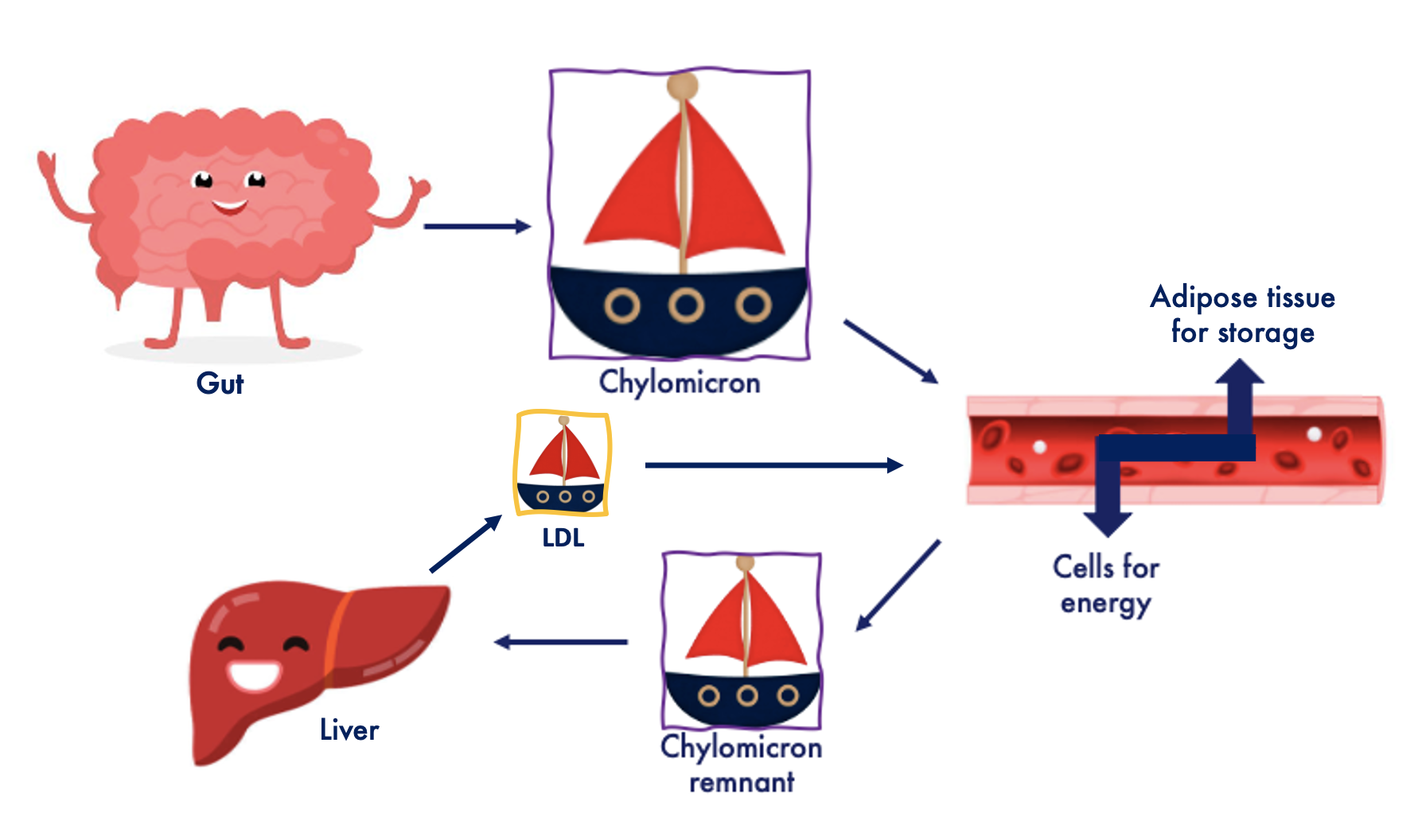 There will be a higher number of 'boats' in your bloodstream in the hours after a meal. The primary role of this system is to ensure that fat doesn't remain in the blood, and that it's either delivered to cells that require it for energy (i.e. the heart and muscles), or stored within the adipose tissue.

Having consistently high levels of fat in your bloodstream is a sign that this system isn't working as well as it should, and that your body is struggling to regulate fat effectively.

When you eat carbohydrates in a meal, they're transported through the stomach and into the gut where they're broken down into simple sugars (glucose). This glucose is then released into the bloodstream, which causes a rise in your blood glucose levels. Your pancreas will respond to the rise in blood glucose by releasing the hormone insulin.

Insulin acts like a key: it opens the doors to the cells in your muscles to allow glucose to enter. Once inside the cell, the glucose will either be used for energy or stored as glycogen. Glycogen is our body's storage form of carbohydrate and is made up of many glucose molecules connected together. We store glycogen within the skeletal muscle (maximum storage capacity of around 1500kcal), or in the liver (maximum storage capacity of around 400kcal). 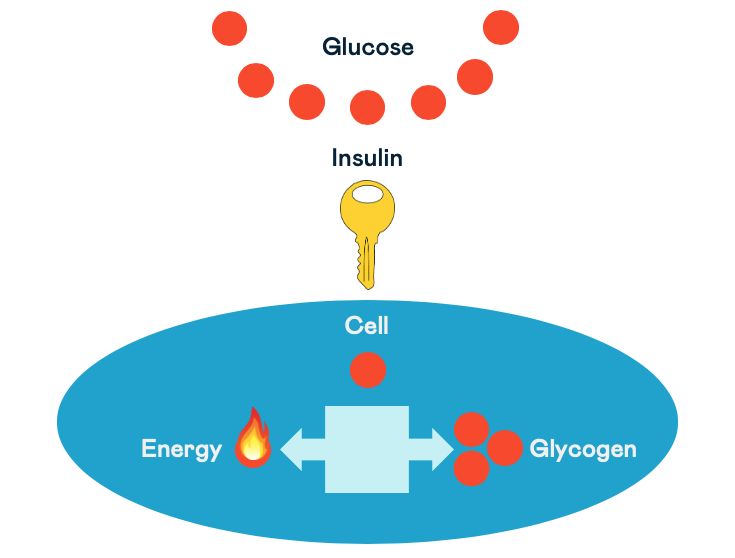 Insulin also plays a key role in this process. We mentioned earlier that fat travels around the body in chylomicrons, and depending on what the cell needs, will either be stored in the adipose tissue or used for energy. To ensure that our cells aren't 'overloaded' with both fat and glucose at the same time (think of an overflowing fuel tank), insulin tells the body to store the fat straight away in the adipose tissue, rather than using it for energy within the cell.

This means when glucose is present in higher volumes (e.g. after we eat a carbohydrate-rich meal), the body will use this glucose as it's immediate fuel source, and the fat from our meal will get stored rather than burnt as energy. This is because the body has a limited capacity to store glycogen (1500kcal in the skeletal muscle and 400kcal in the liver), versus it's capacity to store fat (50-70,000kcal in a lean male).

Type-2 diabetes is an extremely complex condition, and there are multiple theories as to how it develops. However, all theories agree on the fact that increased fat stored in the liver and pancreas play a role.

The 'personal fat threshold' hypothesis states that every individual will have a level at which they can no longer store subcutaneous fat in the adipose tissue (aka fat under the skin). It's at this point that liver and pancreatic fat will increase, and type-2 diabetes will start to develop or progress at an increased rate.

In part 2 of our Personal fat threshold series, we'll discuss how adipose tissue grows and forms new fat cells, as well as how the consumption of carbohydrates influences our body's rate of fat storage.

Did this answer your question?